To share your memory on the wall of Willis Martin, sign in using one of the following options:

Bill was born in The Dalles Oregon on November 27, 1933 to Paul and Geraldine Mart... Read More
Willis “Bill” Martin, 87, local businessman, rancher and farmer passed away on April, 3rd 2021 at the Auburn Regional Medical Center in King County.

Bill was born in The Dalles Oregon on November 27, 1933 to Paul and Geraldine Martin. Bill graduated from The Dalles High School in 1952. In 1957, after working at The Dalles Soda Works, he, along with WWII bomber pilot, Herb Gedney, moved to Grays Harbor to form Harbor Pacific Bottling, Inc., a Pepsi-Cola franchise for Grays Harbor and Pacific Counties. Bill was known for his innovative nature and was a leader in the formation of Columbia Bottlers Group, a multi-million case production center co-op formed to service the needs of Pepsi bottlers throughout the state. For 60 years Bill owned and operated Harbor Pacific Bottling, Inc. which now operates under the ownership of his two sons.

Bill married his childhood neighbor and friend, Joan Woolsey on September 17, 1957 at the First Presbyterian Church in Aberdeen. In addition to their family, Bill and Joan’s true passion together was animals. While enjoying animals of all sizes, Bill particularly explored his passion for horses, llamas, and yaks at their farm in Elma. Bill was a member of the Grays Harbor Sheriff’s Posse, raised and raced horses at tracks such as Longacres and Portland Meadows, imported llamas from Bolivia and raised Tibetan yaks. Bill also actively enjoyed farming and managing their ranch in Elma until the last of his days with us.

Bill was also very active in and contributed back to his community in many ways. He was the leader of the formation and construction of Harbor Park, a five-furlong horse track operated at the Elma Fairgrounds from 1982 until 1997. The nearly all volunteer operation was organized by Bill each year who was known to have been pretty convincing in his methods to get others to volunteer their time for the event which successfully brought many people to the Grays Harbor community each year.

Bill’s family ask that any memorial donations honoring him be made to PAWS of Grays Harbor.

He was interred at the Elma Masonic Cemetery during a private ceremony on April 12th. A celebration of Bill’s life will be held at 1:00 PM on May 22 at the family property in Elma, WA. Please contact Tim Martin at 360-470-3476 or email billmartinservice@gmail.com for details.

To send flowers to the family or plant a tree in memory of Willis Gerald "Bill" Martin, please visit our Heartfelt Sympathies Store.

We encourage you to share your most beloved memories of Willis here, so that the family and other loved ones can always see it. You can upload cherished photographs, or share your favorite stories, and can even comment on those shared by others. 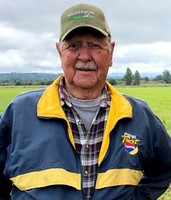